According to this thoughtful piece by Dr. Christopher Emdin, teaching should be about relationships and cultivating in students a sense of agency together with the skills and dispositions that they need to possess in a democracy. regardless of whether they are online or in person. At their best, our nation's classrooms are sanctuaries for our children where all children can thrive precisely because education "reaches them."Dr. Emdin refers to this as "reality pedagogy."

From where I sit, this is Ethnic Studies. It includes content, but it's the pedagogy itself that is liberatory because it gives children voice. This kind of pedagogy is social justice-oriented, situated in the lives and experiences of the children.  He calls out how white guilt is what limits our children in the classroom.

I encourage you to also hear this excellent presentation by Dr. Christopher Emdin at Teachers College where he elaborates more fully on reality pedagogy. Teachers and university professors should take interest in this. Enjoy!

It’s about reaching students where they really are. 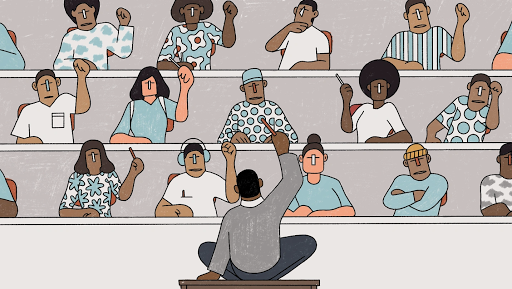 Editor’s Note: In the next five years, most of America’s most experienced teachers will retire. The Baby Boomers are leaving behind a nation of more novice educators. In 1988, a teacher most commonly had 15 years of experience. Less than three decades later, that number had fallen to just three years leading a classroom. The Atlantic’s “On Teaching” project is crisscrossing the country to talk to veteran educators. This story is the 18th in our series.

In the fall of 2001, armed with an undergraduate science degree and a rushed teaching credential, I stood in front of a sea of Black and brown middle-school students in the Bronx and announced that I was their teacher. On the first day of school, I told them, “This is my class. I am going to be teaching you science and math. You will listen, you will work hard, and you will be respectful.” I had practiced these lines in the mirror for weeks. My shoulders were back, my hands were in my pockets, and my teacher scowl had been perfected. Everything I had been told about how to teach—that success was only attained in a quiet, contained classroom, and you had to be tough to maintain it—was contained in those few lines.

A few weeks later, I was walking the aisles of the classroom while my students were working quietly on math problems, when loud sirens began to penetrate the walls. Thinking it was just another police car or ambulance, I yelled at my students to focus. In that moment, ensuring that they were not yielding to distractions was my biggest concern. But the sirens persisted for longer than usual. Students looked up at me with concern; my brows tightened in a scowl that forced their eyes back to their notebooks. I knew that no math was happening, but as long as no eyes were lifted from the page, I felt successful. Then the phone rang.

The voice on the other end informed me that two airplanes had crashed into the World Trade Center. Parents were storming the school building and wanted to take their children home. I was told to keep the students focused and not tell them that anything was happening. One student in my class, scared by the sirens and the confusion, asked if she could call her mother. I said no.

In the weeks that followed, words like terrorist and bomber became common language. On more than one occasion, I heard those words hurled at the three Muslim students in my classroom, but I just told the students who had wielded them to watch their language and kept on teaching.

I taught through violence against Muslim students and used the permission I tacitly received from the school to justify my inaction. I ignored the chaos of the world beyond the classroom because I believed that it was my job to just keep on teaching. Looking back now, I realize I was not actually teaching at all.

Almost 20 years after September 11, 2001, the coronavirus pandemic has emerged as another siren, tearing through our collective sense of normal. We are responding to this virus and adjusting our methods for remote learning. But institutional racism is also deadly, and it’s even more widespread. Derek Chauvin, the police officer who murdered George Floyd, had a symptomatic case of the racism virus. But teachers place metaphorical knees on the necks of young people in classrooms all the time—and their symptoms aren’t always as obvious. I know this because I had the virus, too.

The best teachers don’t just keep teaching. Instead, they use their pedagogy as protest: They disrupt teaching norms that harm vulnerable students. In my years in the classroom since 2001, I’ve learned something about how to do this. I call it reality pedagogy, because it’s about reaching students where they really are, making sure that their lives and backgrounds are reflected in the curriculum and in classroom conversations.

Reality pedagogy interrupts the notion that teaching is about managing students and their behavior. Instead, I’ve learned to see them as co-teachers, and I create space for dialogue—in small groups outside of class—about how they experience the classroom and the world beyond it. It’s a space for connection, but also for any critiques they have of my teaching. These conversations are generative for everyone involved. Teachers need feedback from their students, who can see what teachers have been trained to ignore in their blind pursuit of a calm, quiet classroom. And students need a sense of agency, which they are often denied.

Co-teaching requires that teachers be humble enough to become students of their students—especially the students who have been most harmed, and will benefit most from a teacher listening to their experiences. In my first years of teaching, I never asked to hear my students’ thoughts about having to sit and learn while the world around them was going crazy. I didn’t make space for my Muslim students to heal from being targeted. But if I had started that dialogue, I would have learned a lot from them about how I could have been a better teacher.

When students have this kind of agency, a classroom can start to function like a family—or even a small society. I give all of my students a classroom responsibility that counts toward their grades and involves taking care of the physical classroom and each other. And I institute democratic decision making for all actions taken in the classroom: Students help to decide what assignments we work on, how long we spend on activities, and what to discuss. The classroom can serve as an example of what the world should look like—all students with equal power, regardless of their culture or background—rather than a replication of what it is.

Reality pedagogy involves connecting academic content to events happening in the world that affect students. The curriculum can weave in specific references to the neighborhoods where young people are from, inequities that they and their families are hurt by, and protests in the community. But that doesn’t mean these lessons are always serious. Students can compete to show their knowledge through art, games, and music. I have created projects like the Science Genius competition, where young people write raps about science content and events happening in their lives and compete to be the best scientist, rapper, and storyteller. The classroom—especially for Black youth—should not feel like a place where they are policed or silenced. Black joy can be a part of daily learning.

All teachers will sometimes fail. But that’s why we have to accurately see ourselves in the classroom. I suggest that teachers  videotape their teaching for study, so they can self-diagnose for the racism virus they may be suffering from and spreading unintentionally.

In 2001, I thought that good teaching meant delivering content knowledge to students who were behaving “appropriately.” In 2020, I know that is not enough. I’ve learned to see my classroom as a platform for empowering students and transforming society, and to use my pedagogy as a form of protest against norms that silence students. Far from sacrificing content knowledge, engaged students, whose voices are heard, are better able to learn it.

A pedagogy of protest privileges dialogue with students even when the school schedule says there is no time for it. It creates space for youth to teach about their lives even when the curriculum says there is no space for it. It focuses on building community and family even when the school administration tells teachers not to express emotion with students. If teachers want to respond to racism as they’ve responded to the coronavirus pandemic, they can start here—in their own classrooms.

We want to hear what you think about this article. Submit a letter to the editor or write to letters@theatlantic.com.

CHRISTOPHER EMDIN is a professor of science education at Teachers College, Columbia University, and the author of For White Folks Who Teach in the Hood ... and the Rest of Y'all Too.