Seurat at Saugatuck in Saugatuck, Michigan 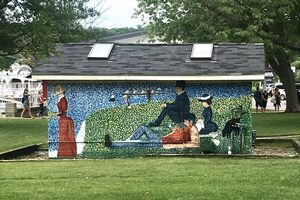 In 1977, the head of the Wicks Park asked Carol Miron, who studied at the Art Institute in Chicago, to consider producing a "Saugatuck Seurat" on the walls of the restroom in the park. Saugatuck had just gained ownership of the park two years prior and wanted something memorable and artistic to reflect the creative character of its community.

Miron recreated “Sunday Afternoon on the lie de La Grande-Jatte" by Georges Seurat, accommodating the windows and doors seamlessly of the park's bathroom.

When new restrooms were constructed down the street, the “Seurat” building was slated to be demolished. However, after objections from the surrounding community, the building was preserved. Subsequent artists, both professionals and aspiring high school students have continued to periodically refresh the eye-catching landmark.

“Saugatuck’s Seurat” anchors the downtown park, inviting its viewers to imitate the leisurely activities of its weekenders by lounging on the lush grass.