by admin June 17, 2020
Demonstrators in Washington, D.C. recently covered a large temporary fence in front of the White House with signs, paintings and pictures. The art appeared during protests against the killing of George Floyd. Floyd, a 46-year-old black man, died after being arrested by police in Minneapolis, Minnesota. The incident has caused unrest nationwide. Many of the objects and pieces of art were hung in memory of black men, women and children who have lost their lives in violence linked to police actions.  Now, those tributes are being collected for a more permanent home at the Smithsonian Institution.  The tall, temporary fence was not the only place where artwork has appeared.  In central Washington, office buildings and windows of restaurants that normally appeal to business leaders have been covered with plywood. The strong, thin material was meant to protect against property damage that took place in the city earlier this month.  Local artists soon began using the plywood as a surface for paintings and messages. Levi Robinson is one of those artists. One of his pieces appears on the boarded-up window of a restaurant in Black Lives Matter Plaza, a recently-renamed area near the White House.    He described the artwork to Reuters  reporters: “I decided to show black medics who serve in the military after speaking with some examples who were on site handing out water." He said the medics "began to tell me their stories.” Aaron Bryant is a photography and social protest historian at the African American History and Culture Museum. The museum is one of several that makeup the Smithsonian Institution on the National Mall in Washington, D.C. Bryant is leading the team of museum workers collecting plywood paintings, signs and objects that will one day represent this moment in history.  He said protest artwork of the 1960s civil rights period were often made by professional artists. This moment’s artwork, he said, is different.    “Today, people are making signs by hand and running out of the door," Bryant said. "There is more diversity in the signs you see."  He added, “It’s hard to talk about this moment’s artwork with one common denominator, but what I see is this idea of humanity and community. People coming together to make...messages that will last for generations.” The Washington-based P.A.I.N.T.S Institute helped organize 42 artists and volunteers to design murals in Black Lives Matter Plaza. The murals show black men and women. Some are wearing face masks. The murals have words like “Let Us Breathe” and “God is Love.”  Jemn Napper is a first-time public mural artist. She said she hopes her downtown Washington pieces help people understand that “even though we may have our differences, we can all play a part to come together and create change.” I’m Ashley Thompson.   Katanga Johnson reported this story for Reuters. Ashley Thompson adapted it for VOA Learning English. Mario Ritter, Jr. was the editor. _____________________________________________________________   Words in This Story   tribute –n. something that you say, give, or do to show respect or affection for someone​ boarded-up –adj. related to covering or closing (something) with pieces of wood​ medic –n. a person who does medical work​ on site –adv.  at the place where a business or activity happens​ moment –n. a very short period of time common denominator –n. something (such as a feature or quality) that is shared by all the members of a group of people or things​ mural –n. a usually large painting that is done directly on the surface of a wall​ 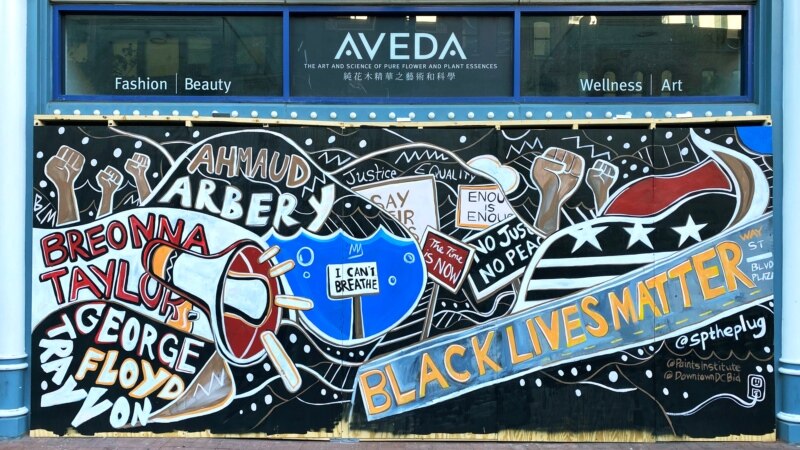