Ninety-three years after its founding, the Academy of Motion Pictures Arts and Sciences (AMPAS) is known worldwide for the Oscars, but little else. Its 8,000 members are invited to previews and movie buffs use its library, but most of its collections are hidden from the public gaze. To make them accessible, AMPAS commissioned the Renzo Piano Building Workshop, acclaimed for its design of the Menil in Houston, the Whitney in New York, and a score of other museums, to create a stunning showcase for the new venture, the Academy Museum of Motion Pictures is opening at the end of the year on Wilshire Boulevard.

“Making a museum for cinema is a bit challenging,” Piano explains. “Besides the historical part, you have the inventive part—the art and science of cinema. That’s why this will be, of course, a museum, but also a lab.”

The original May Company Building, a Streamline Moderne department store of 1939, has been scrubbed and remodeled for the display of exhibits, and bridges link it to a glass-shrouded sphere of concrete containing a 1,000-seat theater. The curators promise an immersive experience in the craft and technology of film, accompanied by daily screenings in the main theater and a subterranean 300-seater. Starry events will be held on the roof terrace, where a canopy of glass frames a panoramic view of palm trees, the Hollywood Hills, and a distant glimpse of the Hollywood Sign. It’s La La Land come to life.

Piano understood the importance of separating the theater from the exhibits. “A movie theater is a place where you invite people to take off,” he says. “Making the sphere building float above the ground was part of that idea. In a movie, you don’t move; the sequence is there on-screen. In architecture, it’s the opposite. You move from one place to another, in a sequence.”

The glass sphere plays off the stone-clad block, and together they extend an axial complex of galleries Piano added to the LA County Museum of Art on the adjoining site. When he unveiled his master plan for LACMA, Piano likened it to “walking through the medieval Italian city of San Gimignano, an architectural promenade through narrow streets opening onto intimate piazzas, discovering varied buildings along the way.” Some of those surprises are incorporated into the Academy Museum, along with the theatricality of the great American movie palaces of the 1920s. S. Charles Lee, a prolific designer of movie theaters, once declared, “The show begins on the sidewalk,” and he used neon-lit marquees and terrazzo pavements to create a sense of wonder for the lines of people waiting to get in. That concept is abstracted in Piano’s building. 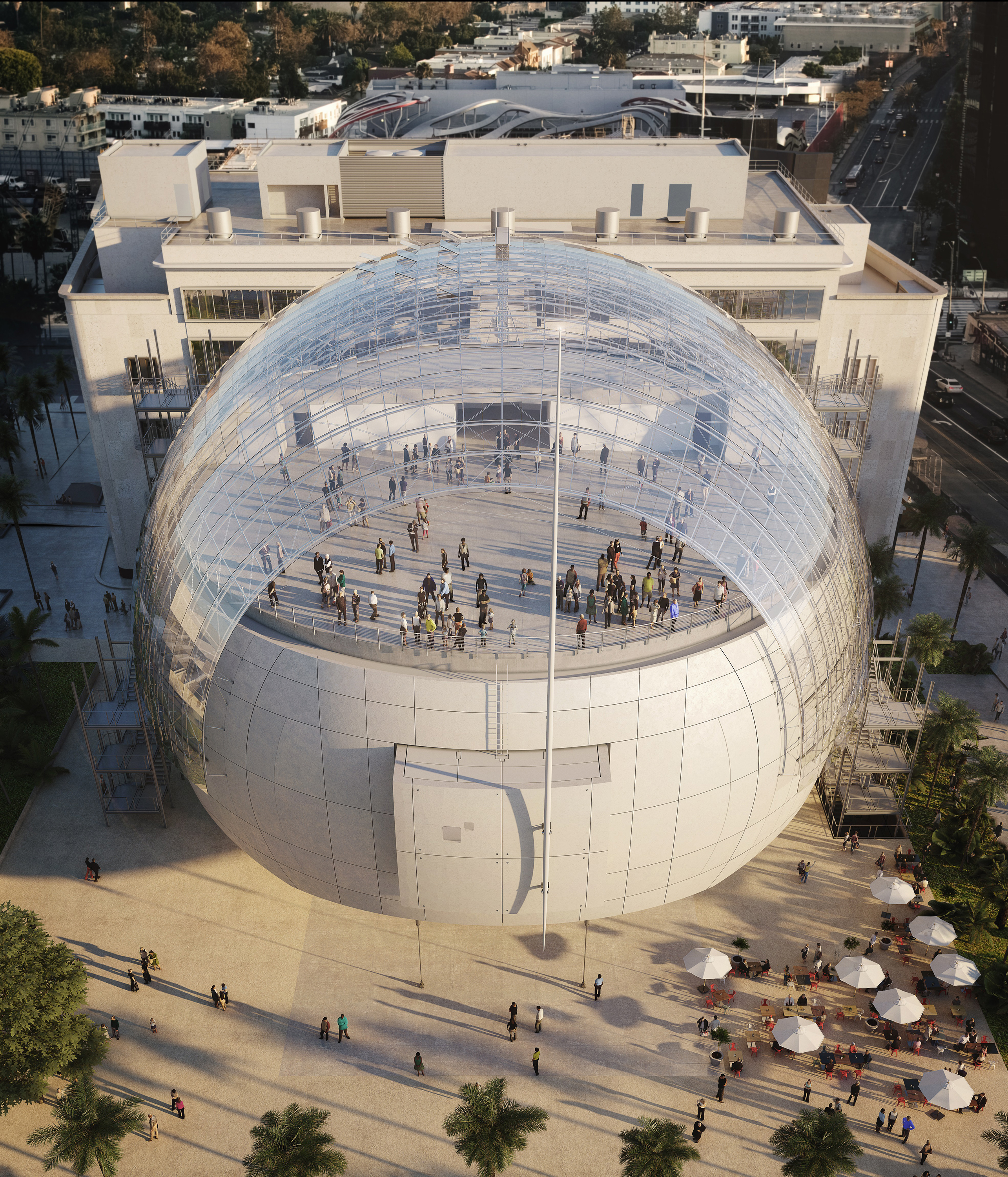 The concrete sphere of the Geffen Theater is supported on four massive piers equipped with base isolators—giant springs that should absorb the shock of a major earthquake. It’s cantilevered 65 feet out to north and south and tied down with spring-loaded cables to cushion a seismic thrust. LEDs are set into the pavement and soffit of this great portico to build anticipation for the entry into the historic building—with its new glass curtain wall to draw in northern light—up a flight of steps, and across a bridge to the theater. Audiences will then pass through a darkened corridor and up the sides of the rounded auditorium as the expanse of seats gradually reveals itself. This alternation—“between compression and expansion, shadow and light,” as Piano describes it—will restore a sense of ceremony to moviegoing, an experience that streaming and the multiplex cannot replicate.

Ideally, the exhibits will capture the magic of the images on-screen and the complexity of the process by which films are made. Star portraits and posters, costumes and props, have become part of American folk mythology, and they are freighted with memories. Many will flock to the museum to see such legendary artifacts as the ruby slippers Dorothy clicked together in The Wizard of Oz, or the doors of Rick’s Café Américain in Casablanca, just as most visitors to the Louvre crowd in to gawk at the Mona Lisa. The trick will be to enlighten as well as entertain, revealing the rich history of the moving image and the collaborative nature of moviemaking.

For AMPAS, the curating task will prove to be a challenge. Yes, they can draw on a rich collection that includes 12 million photos, 190,000 films and videos, and 63,000 posters, using their prestige to secure more donations, and yes, they have access to technologies that were unknown 30 years ago. But public expectations are much higher, and they will have to embrace the whole world of motion pictures, old and new, American and foreign. Other film museums around the world have had varied success. The Cinémathèque Française in Paris reflects the passion of Henri Langlois, an obsessive collector. In Turin, the National Museum of Cinema is an awkward fit for the Mole, a soaring landmark designed as a synagogue. Amsterdam’s Eye Filmmuseum offers a rich program of exhibits and activities in a daringly cantilevered building on an island in the harbor. The Academy Museum will have to match or excel a hundred other showcases of film.

This stretch of Wilshire Boulevard was built up during the Great Depression and dubbed Miracle Mile. The development culminated with the May Company store (now renamed the Saban Building for its chief donor) and its signature feature—a gold cylinder framed with black granite, alluding to the black gold of the oil that was formerly drilled from this site. In succeeding decades, the boulevard declined and landmarks were demolished. The Academy Museum, the splashy Petersen Automotive Museum across the street, and Peter Zumthor’s daring new galleries for LACMA, soon to break ground, offer a new kind of miracle.