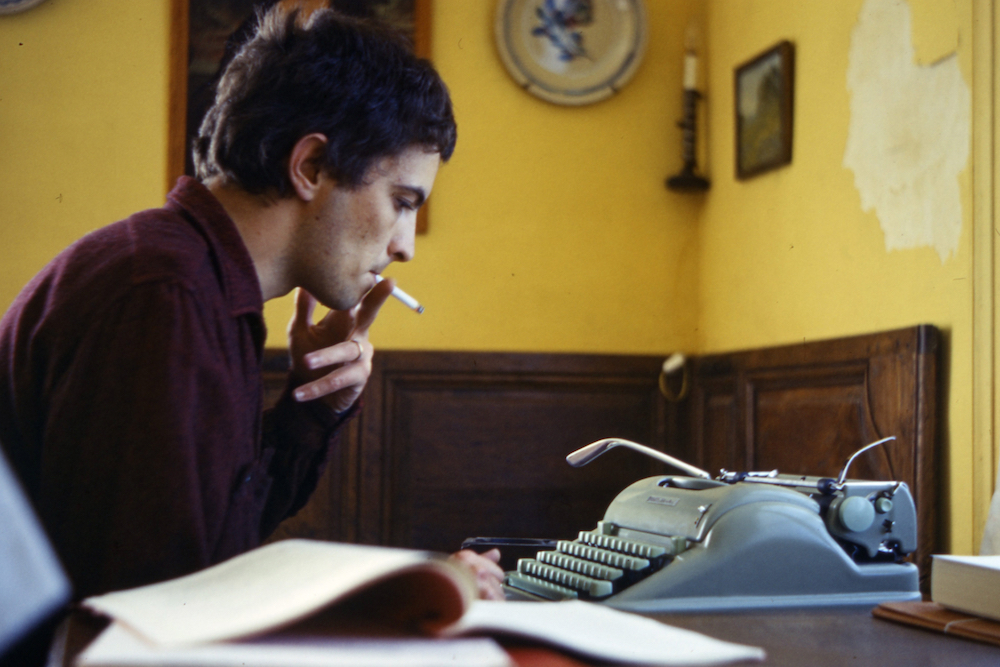 They were nearly all Islanders in the Pequod, Isolatoes too, I call such, not acknowledging the common continent of men, but each Isolato living on a separate continent of his own.

Herman Melville called them “isolatoes”—the word he coined for those among us who don’t have much truck with fellow humans. The bonds of society, except in odd and extenuating circumstances, are not really for them. Love, marriage, family seem as strange, distant institutions, things one might observe with a notebook in the other hand. At best, there are a couple of old comrades accumulated on life’s journey to whom one might turn when things go south. For isolatoes, the most constant of companions are those voices inside the head.

Jean-Patrick Manchette’s protagonists are isolatoes. Georges Gerfault in Three to Kill, Julie Ballanger in The Mad and the Bad, Martin Terrier in The Prone Gunman, Aimée Joubert in Fatale: windowless monads, all of them. Memorable, violent, alone.

Eugène Tarpon, Manchette’s private eye in No Room at the Morgue, is among these nations of one. Like many fictional private eyes he’s come to the end of his rope; in fact, as the novel begins, he’s already thrown his badge in the river. Only an unlikely client—is there any other kind?—coming through the door puts his retirement plans on ice.

You perhaps know (and Manchette certainly knew) Dashiell Hammett’s Flitcraft story, an existential parable embedded within The Maltese Falcon. It contains the sentence “He adjusted himself to beams falling, and then no more of them fell, and he adjusted himself to them not falling.” In No Room at the Morgue it goes the other way: As we meet him, Tarpon has submitted to a certain quiescence. He has adjusted himself to a life where beams no longer fall. And then one does. Providing him with a headache, us with a narrative.

As is so often the case with Manchette, the shadow of May ’68 hovers over all, much as the shadow of the Occupation hovers over the novels of Patrick Modiano. It’s what our Lacanian friends would call “the structuring absence.” The France of Eugène Tarpon is littered with the debris of failed revolt. If those who make half a revolution only dig their own graves, Tarpon’s journey is a slow stumble across that graveyard: his Paris is a Père Lachaise of the soul.

Yet Tarpon is no soixante-huitard; rather, he’s a retired (or cashiered) gendarme who killed a militant during a protest (imagine a Sam Spade who, like Hammett, had previously worked as a Pinkerton but, unlike Hammett, had also been a strikebreaker). When we meet him in the “fifth floor, no elevator” flat near Les Halles that serves as his home, his office, his life, he’s drinking pastis straight, his bank account has cratered, he’s within twenty-four hours of going home to mom in the provinces. The adventure/misadventure into which he is then swirled with about the same degree of agency here as Dorothy when a twister swept her to Oz—takes him to that most Manchettian of locales, an abandoned house in the country, where pro-Palestinian rebrands and American mobsters clash by night. Tarpon’s attitude toward the former mirrors Manchette’s own—as he wrote in his diary, “the collapse of leftism into terrorism is the collapse of the revolution into spectacle.”

From the carnage of the countryside, Tarpon makes his bloodied way back to Paris—to what might nominally be called civilization—only to be followed, abducted, drugged, shot at, and stabbed by a farrago of gangsters, pornographers, miscreants, sociopaths, and killers. In this upside-down world, the nice guys turn out to be the cops. They don’t beat you up unless there’s a reason for them to do so.

For all of the gimlet-eyed precision with which Manchette observes human activity in the post-’68 landscape, he always gives us a character or two who behave well, and with empathy for their fellow beings. In Three to Kill it was Raguse, the kindly alpine recluse who takes in our protagonist. In No Room at the Morgue it’s the journalist Haymann, who helps Tarpon when he doesn’t really have to; and the upstairs neighbor, the elderly tailor Stanislavski, who has never harmed a soul, and suffers the consequences. Manchette uses these figures to cast in high relief the bad faith and worse behavior of the rest of us, caught in the convulsions of late, or one may say after-hours, capitalism.

The language he uses to depict these convulsions only heightens the terror and the absurdity—André Breton would surely recognize in Manchette a fellow practitioner of humeur noire. As Tarpon narrates, “I was making up theories in my head: Was Haymann an Israeli agent? And was it in fact Memphis Charles they’d tried to assassinate the other night? My theories were collapsing one by one, but I started constructing them all over again. At the same time, I was dreaming of steak frites. And it was getting mixed up in my theories. Béarnaise sauce was dripping down the faces of Palestinians. In my head, I mean. In my head.” Or, more offhandedly: “Memphis Charles had dragged the American who was still alive into the workshop and she was attaching him to the pipes. Life goes on, like the song says.”

Still, from time to time—and this is what makes No Room at the Morgue so poignant—we’re also allowed a window into the heart, an access given legitimacy by the fact that it occurs so rarely and against a landscape so invariably gray. Here we have a mobster who inexplicably breaks down in tears. We don’t understand it but are moved. And then, later, we do understand it and are moved yet more deeply. For Manchette, these moments of fragility, of tenderness, aren’t moments of weakness. But they’re not moments of strength, either.

No Room at the Morgue and its sequel, Que d’os!, are the only two of Manchette’s novels to feature a private eye as protagonist. Though in Manchette there’s never a shortage of killers for hire, killers for the hell of it, casual psychotics, mercenaries, and the corruption of each and every institution, there are relatively few police in his policiers, and very little mystery about the who in whodunit. The Tarpon novels are in some sense a throwback to a time when the genre was more tightly defined, its tropes less problematic. We’ve got a down-at-heels P.I. here, and bad guys, and a femme-more-or-less-fatale, and a couple of cops either of whom could be played by Lino Ventura. But Manchette certainly isn’t slumming, or doing a genre turn to please his fans. As Manchette asks, “What do you do when you re-do [the classic American crime novels] at a distance—distant because the moment of that something is long gone? The American-style polar had its day. Writing in 1970 meant taking a new social reality into account, but it also meant acknowledging that the polar-form was finished because its time was finished: re-employing an obsolete form implies employing it referentially, honoring it by criticizing it, exaggerating it, distorting it from top to bottom.” Or as he put it more bluntly (and more flamboyantly): “The overtures of the ‘neo-detective novel’ have been progressively conquered by literary hacks (of Art) or by Gorbachev-loving Stalino Trotskyist racketeers.”

No Room at the Morgue is, then, a story that begins with Marx and ends in Freud, stopping along the way at Wilhelm Reich. In some sense the novel is an omnium-gatherum, a cabinet of wonders containing all of Manchette’s favored objects: a broke, alienated protagonist with a great future behind him; men at the very end of their tether; women in dissociation and distress; a supporting cast of radicals, terrorists, antiterrorists, libertines, mobsters—isolatoes all!—whose mental state could at best be called fragile. All of them driving around the high-numbered arrondissements in beater Peugeots and Simcas that, like their drivers, could at any moment be taking their last breaths.

In Preston Sturges’s sublime The Palm Beach Story, Tom Jeffers (Joel McCrea) is tracking his wife (Claudette Colbert), who’s decamped to Florida. Jeffers follows. He finds a sleeping-car porter who was working the train that brought his wife to Palm Beach. Jeffers asks of the porter, “Was she alone?” The porter responds, “Well, you might practically say she’s alone. The gentleman who got off with her gave me ten cents from New York to Jacksonville: she’s alone, but she don’t know it.”

So many of Manchette’s protagonists are exactly that: they’re alone, but they don’t know it. Or at least don’t know it until the events of the narrative hammer home, with impeccable vengeance, that bleak and final truth. But in No Room at the Morgue, Eugène Tarpon is alone, knows it, makes no bones about it. He doesn’t see solitude as something to be remedied—rather, it’s a given, like the beer he drinks, the cassoulet he eats right out of the can, the cherished, rusted Browning that jams at the instant of need.

Howard A. Rodman is the author of the novels Destiny Express and The Great Eastern and the screenplays Joe Gould’s Secret and Savage Grace. He is a past president of the Writers Guild of America West and a Chevalier de l’Ordre des Arts et des Lettres.

From No Room at the Morgue, by Jean-Patrick Manchette, translated from the French by Alyson Waters, published by New York Review Books next week. Afterword copyright © 2020 by Howard A. Rodman.